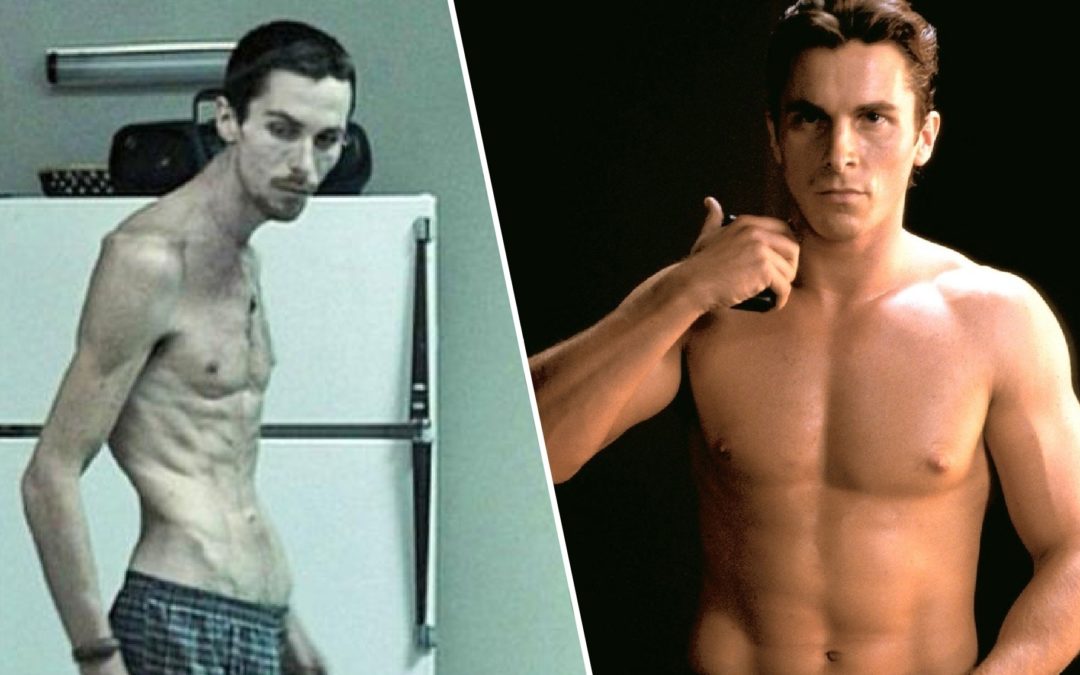 Googling Superheros’ workout regimes and diets are a common activity when people are looking for fitness programs.

Search terms like “Chris Hemsworth Workout”, “Chris Evans Diet” or “Superhero Workout“ are quite popular according to Google.

Superheroes are generally associated with muscles, strength and super forces. Also, when speaking about superheroes, we immediately get this image in our brains of an athletic, visually attractive and very masculine guy with a lot of sex-appeal.

The reason why we google for fitness programs associated with personalities like Christian Bale (who acts in Batman), Chris Hemsworth (who plays Thor), or Chris Evans (who is the main character in Captain America), is pretty clear: a superhero’s body is extremely appealing and of course, we’d strive for that god-like superhero body as well.

Everybody knows that to become muscular and look jacked, you not only need resistance training, but also a well thought out diet and proper recovery plan.

No one ever will get a superhero physique without working out at all and eating crap food all day, unless you’re willing to undertake some surgeries and let some implants make you appear muscular. It looks awful by the way, but as always, to each his own.

I believe we all had once thoughts similar to “Damn, I want to be a superhero!”. They do not only have that great physique with wide shoulders, huge arms and literally abs of steel, but they also have a not-from-this-earth strength and super powers. They also save the world and even better, they get the most attractive girls (this might not count for the Hulk, though).

If you ask me, there is no reason for not wanting to be a superhero.

The Physique of A Superhero

The main question here is how do superhero’s physiques differ from average person’s ones?

To answer this question, let’s look at some actors who got roles in superhero movies. 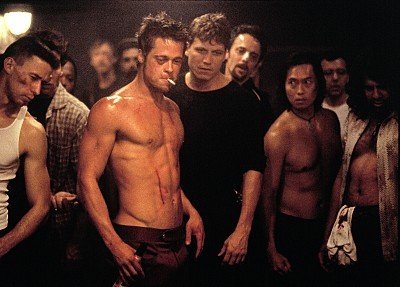 Why Superhero Workouts And Diet Plans Are Useless For You

Celebrity workouts and their diets have become very coveted. They can be found on forums, blogs and fitness magazine pages. They are literally spread all over the World Wide Web.

However, as cool as it might sound at first, you should enjoy such information with caution for several reasons.

First of all, there is often no source for the provided plans declared. How can we be sure these programs are real?

In fact, I could write down a general workout plan and sell it as Christian bale’s workout plan. The same goes for diets of course. I don’t like to put everyone in the same basket, but to believe everything you read conforms to the truth would be nothing but naïve.

To be honest with you, there was a time I used to do that as well. I googled for celebrities workout plans. What I found is that most of them didn’t differ at all from all other programs that are available online. There’s absolutely nothing special about them. Above that, the workouts often contained 4-6 different workouts a week and nothing more. I highly doubt that actors like Chris Hemsworth or Christian Bale followed the same routine week after week. 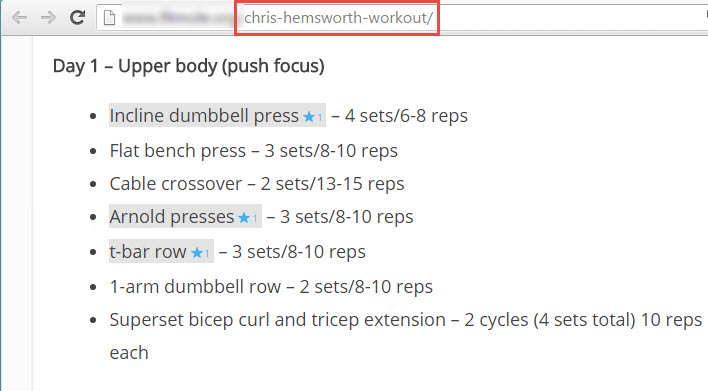 Another publisher of Chris’ Workout Regime

Everybody knows that workout plans need to be changed over time to give your body new stimulus, which is essential for muscle growth. This can be done by either changing the amount of performed repetitions and sets or incorporating different exercises.

Free tip: If you hit a plateau in the gym, simply shock your body by doing 15 reps in a set instead of your actual rep range. Do this with every exercise for a full week and get back to your regular routine after. You’ll be surprised how much this can help to break plateaus.

One Size Doesn’t Fit All

You’ve got to understand that actor is a full-time job. Spare time between movies is used to prepare for upcoming roles, meaning actors need to model themselves toward the shape the movie directors want them to be.

Christian Bale once dropped from 82 kilograms to about 55 kilograms. Afterwards, he bulked back up to 100 kilograms.  Probably not very healthy, but it’s part of his job. Christian of course, like any other Hollywood celebrity, had the precious support of specialists, meaning he had one of the best personal trainers in the world at his side. The fitness programs actors follow in order to get a particular look are specifically designed for them. 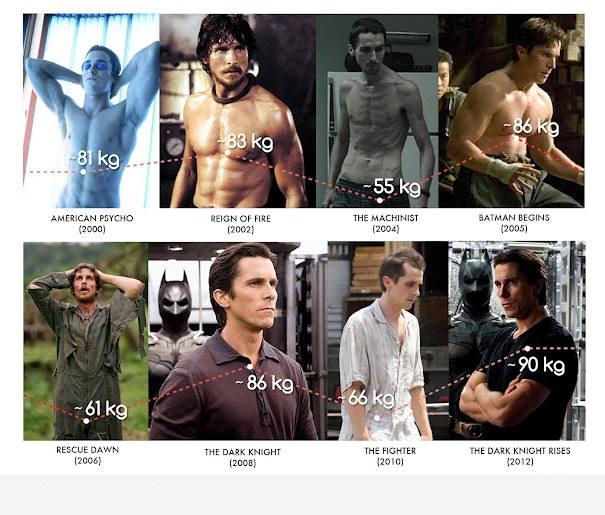 The impressive (and surely healthy) transformation of Christian Bale

Imagine you would follow the same diet like Christian Bale when he bulked up to 100 kilograms. You might build some muscle, but also a good amount of fat. Even though diets found with google were real, they would not have the same effect on your body like they do on theirs.

Another thing we have to take into consideration is that celebrities sometimes train more than once a day. I don’t know a lot of people who have a 9-to-5 job and can manage two or more workouts a day (which doesn’t mean it’s not possible, though).

It’s a commonly held perception that if you follow one’s training regime and eat the same way like a particular person, you’ll sooner or later look the same. I wish this were true, but unfortunately, it’s not.

Joe Manganiello, for example, divulged some of his workouts he used during his preparation for Magic Mike. They were circuit workouts in which he performed exercise after exercise at high reps and very low rest times in between sets. This surely will help you to burn calories and get lean, provided your diet is tailored accordingly. However, if you believe you’ll look like Joe after some time, then you’re completely wrong.

The difference between you and Joe is pretty much that he already had a good amount muscle by the time he started his Movie preparation for Magic Mike. I’m not speaking about some slightly visible abs or a bigger biceps than an untrained guy, but about real, over the years developed muscle mass.

As he burned a lot of calories and decreased his daily calorie intake, his body fat percentage dropped to the single-digit range and he got the notable superhero physique that everyone wants.

If someone who just started fitness followed the same diet and workout plans, he or she wouldn’t look nearly as good as Joe Manganiello. In fact, there is a good chance he’d look like a skinny, starving skeleton. And this is definitely not what we’re trying to achieve. We’d like to get muscular, extremely strong and well-looking in our swimsuits, right?

And Then There’s Anabolic Steroids

Anabolic Steroids – not the powder that strength athletes drink after their workouts and neither some special kind of Creatine, but real injectable anabolic steroids. 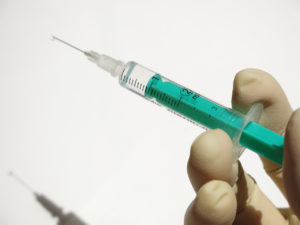 The usage of anabolic steroids is quite common in Hollywood

Yes, steroids can be dangerous and no, I don’t promote steroids usage. Nevertheless, we have to face the truth: Hollywood does use anabolic steroids. However, it has to be said that those steroid users (hopefully) get their blood tested regularly and in comparison to the illegal way, steroid usage is used under doctor control. This way, dosages are regulated and measures can be immediately taken in case side effects occur.

I don’t judge actors who use steroids. I would probably do the same if I was in the same position and would indirectly earn millions with it.

The take-away here is, don’t expect too much from celebrity diets and workout programs as celebrities work under completely different circumstances.

Instead, you should search for routines that are proved to work on similar bodies like yours. If you want to increase muscle, then you want to find a fitness program that already helped people in that regard. On the other hand, if you want to lose weight, look for a fat loss program with whose many people had success with.

The first step is to identify what exactly you want and need. It’s widely believed that body fat can be transformed into muscles. The truth is that it’s way more efficient if you focus on a single goal at a time. Either build muscle or lose body fat. I can hear people say they want to ‘grow muscle and get rid of body fat’ in a short period of time, and that just isn’t really realistic. By aiming for one goal at a time, you will get much more out of what you are trying to achieve.

Performance Meets Aesthetics – Look And Perform Like A Real Superhero!

Christian Bale, Chris Hemsworth, Chris Evans, Brad Pitt and Joe Manganiello. Without a doubt, they all got god-like physiques. However, other than shown in movies, they don’t have super powers in real life. Sad to hear that, huh?

To me, the real superheroes are the ones who do not only have great physiques, but are also able to perform like a superhero.

Brandon Wynn, who’s a professional American gymnast, is crazy strong. See what he’s able to do with his body. Awesome! And just look how ripped he is. He is a real superhero in my eyes. 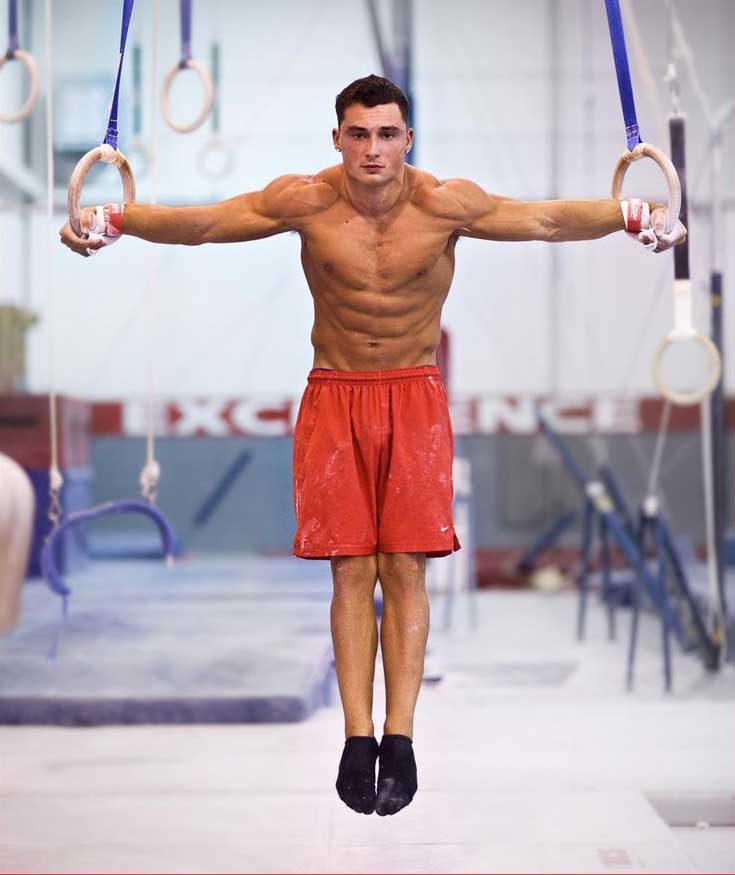 Lifting weights is part of his training, but this is just a small piece of the whole puzzle. Eating the right kind and amount of foods to fuel the body, proper recovery and rest are, at least, as important.

Of course he’s not the only one who has developed a physique like this doing bodyweight exercises. Daniel from Fitnesss FAQ and also from Bar Brothers is other good example of how you can look like when you perform bodyweight exercises (call is Street Workout or Calisthenics, in the end it’s bodyweight training).

So make sure your workout plan contains such bodyweight exercises.

For people like me, who like to lift weights, but also enjoy bodyweight moves and constantly try to improve their gym performance, then I can recommend the Performance meets Aesthetics Program.

The Performance meets Aesthetics program contains three different phases, each with its very own purpose. In phase one, you’ll build that typical V-Taper, grow your arms and build broad shoulders.

In phase 2 the focus is on strength training and increasing your gym performance.

In the third phase, you’ll shed down body fat and get abs of steel.

Do you remember what all superheroes have in common?

The V-Taper, huge arms, broad shoulders and abs of steel!

The Performance meets Aesthetics allows you to improve your gym performance, reach ideal symmetry and body proportions, and get a superhero body.

What you can expect following the Performance Meets Aesthetics Program

Are you ready to step up your fitness game and reach new heights in STRENGTH and PERFORMANCE?